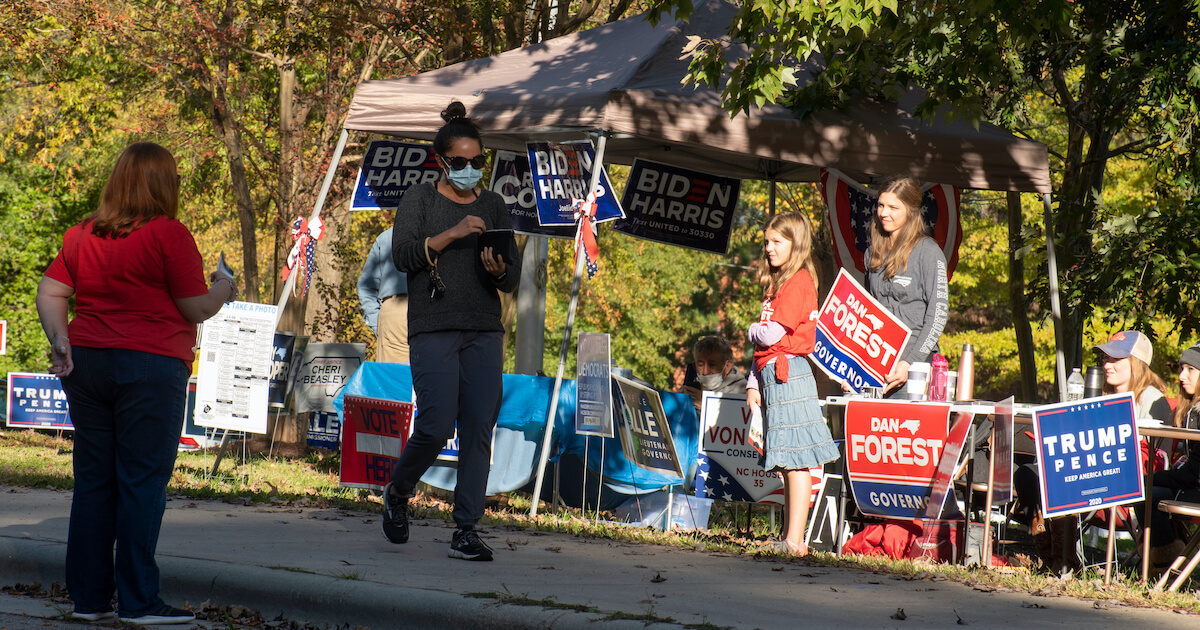 Campaigns are always on the lookout for a competitive edge to change voters’ minds with persuasive messages and turn out more of their supporters to vote. As competitive elections become more heavily contested, even the slightest advantage that could move just a few thousand votes can make all the difference.

In this report, we highlight three recent innovations in voter contact that are shown to have significant effects on both persuasion and turnout. Relational organizing, vote tripling, and deep canvassing are becoming reliable tactics for Democratic campaigns and liberal issue advocacy groups. Republicans and their conservative allies, however, have been slower to adopt these innovations due to relevant cultural differences.

The principles behind these strategies are not new to politics. The importance of reaching the right voter with the right message at the right moment with the right messenger has been known since antiquity. Abraham Lincoln advised his political allies to “keep a constant watch on the doubtful voters, and from time to time, have them talked to by those in whom they have the most confidence.”

What is new is the technology to implement these voter contact strategies at scale. Campaigns of all sizes have access to sophisticated voter files and applications built on graph databases thanks to advancements in cloud computing.

These developments could not have come at a better time for campaigners. The efficacy of paid broadcast and cable TV advertising, a staple of driving public opinion at scale, is diminishing as voters watch fewer and fewer hours of linear TV, instead opting for streaming, ad-free platforms. Major online platforms, like those owned by Google and Meta, where voters spend significant time and get political information are increasingly restricting the ability of campaigns to target and advertise. Similarly, contact rates for phones, texting, email, and door-to-door are dropping with new tools for voters to avoid campaigns.

With these newer, technology-enabled outreach strategies, campaigns can reach voters at significantly higher rates more efficiently than legacy tactics alone. As campaigners reach for every tool at their disposal to persuade and turnout voters, relational organizing, vote tripling, and deep canvassing must be key components of their strategy.

Relational organizing is a new term for a familiar concept. Effective political campaigning has relied on tapping into personal relationships as long as humans have been voting. What’s now possible is doing so at a large scale.

Highly detailed voter data readily accessible to campaigns of all sizes paired with more affordable cloud computing has ushered in a category of new applications that match volunteers with voters they know.

A 2018 digital field experiment using the Liberal voter contact app Outvote (now called Impactive), found that this app-based friend-to-friend outreach led to an 8 percentage point increase in turnout. For reference, the effect of door-to-door canvassing is around 6 points.

In 2019, Turnout Nation partnered with legendary political scientist Donald Green to study the turnout effects of relational organizing campaign and found that voters who heard from a volunteer in their own social network – friends, family, acquaintances, or neighbors – voted at a rate of 13.2 percentage points higher than those who were contacted by randomly assigned volunteers. As they note in their study, this represents “the largest intent-to-treat effect documented by an experimental GOTV study over the past two decades.”

Spending on relational organizing technology by Democratic campaigns and PACs has exploded since 2017, reaching nearly $5 million from federal disbursements in 2020.

Vote tripling is a specific type of relational organizing GOTV strategy, where a supporter is asked to contact three specific friends and encourage them to vote. The execution of this tactic varies. It ranges from simply submitting the names of three friends to a campaign for followup to providing tools for the supporter to contact those friends directly. Vote tripling works for both early voting and Election Day turnout operations.

“The tactic of Vote Tripling is geared toward non-activists, the 97% of voters who will cast their ballot on election day and don’t volunteer for campaigns. Reminding three close friends to vote is an easy, bite-sized task that non-activists are delighted to say yes to.”

According to Vote Rev, the organization which designed this tactic, “Dozens of major partners, including the Biden-Harris campaign, used [Polling Place Vote Tripling]  in 2020 resulting in 94,000 hours of PPVT canvassing that produced 1,100,000 relational conversations.” In 2020, the group spent $3.5 million in the final week of voting to “hire thousands of canvassers to stand outside early voting locations and polling places in nine metropolitan areas.”

Polling Place Vote Tripling relies on staff and volunteers to speak with voters as they are leaving a polling place after voting to message three friends and encourage them to vote. Early pilot projects of this tactic saw about 65% of people asked to participate in vote tripling follow through and contact three friends.

The volume and efficiency of this tactic give it a clear advantage over legacy tactics. “Near a busy polling place, a volunteer can talk to 25 people per hour, and 15 of them will each text three friends. That’s 45 people reached in one volunteer-hour, putting canvassing in the dust,” writes one journalist.

Democratic campaign technology platforms, like NGP-VAN, include vote tripling capabilities in their software. Campaigns can add a vote tripling message to their scripts and record a supporter’s vote tripling pledges for subsequent followup.

Deep canvassing is another recent innovation in voter outreach that has demonstrated significant persuasive effects in field studies. Instead of brief interactions with voters over phone, text, or at doors that use a script to quickly convey information to a voter, deep canvassing relies on a longer conversation where the staff or volunteer listens at least as much as they speak. These conversations are designed to last for about 10 minutes – far longer than a typical phone or door script.

This “promotes active processing and participation in a conversation which increases openness to engaging with alternative viewpoints.” At this point in the script, the staff or volunteer then begins their persuasion efforts by sharing relevant, emotional stories about the candidate or issue in question.

To put it briefly, “The idea is that people learn lessons more durably when they come to the conclusion themselves, not when someone ‘bitch-slaps you with a statistic,’ Fleischer said. It is stories, not facts, that are most compelling to people when they’re changing their minds.”

Advocates of deep canvassing claim it is “102 times more effective per person than the average Presidential persuasion program.” Further, this effect persists for as long as 3 months, which is much greater than most forms of voter persuasion.

While these three new voter contact strategies are becoming more widely deployed in Democratic campaigns, they are not as common amongst Republicans. This is due to differences between the two parties’ voter bases and campaign culture.

Democrats typically rely on a network of issue-based groups around the environment, abortion, organized labor, and gun control to mobilize organizers in addition to the coordinated campaign efforts of the state and local party and individual candidates. It is through these special interest groups that studies about relational organizing, vote tripling, and deep canvassing have taken place.

Republicans, on the other hand, concentrate their field organizing within the official party. The Republican National Committee’s Republican Leadership Initiative is where organizing resides on the Right and participants learn the latest strategies and tactics for voter outreach and mobilization.

In addition to the RNC’s official field program, Republican campaigns and organizations are increasingly relying on paid voter outreach efforts via phone, text, and door knocking. This means less emphasis on recruiting, growing, and engaging a dedicated volunteer corps. From a campaign manager’s perspective, it’s far easier to hire an outside firm than expend the time and energy around coordinating volunteers.

When it comes to field programs, Republican campaigns have typically relied on measures of activity like calls completed, texts sent, and doors knocked instead of whether or not these contacts were effective in changing minds or turning out votes.

Democrats also have a demographic advantage in leveraging new organizing strategies. The population density of urban and suburban areas where Democrats have an edge means tactics like vote tripling and deep canvassing can be used efficiently at scale. In key presidential swing states “there are nearly 3,000 precincts that are 90 percent or more Democratic, but only 111 that are 90 percent or more Republican.”

Finally, it takes early investment of time and money to build campaign organizations around voter contact and mobilization. As we’ve seen in the gap in online fundraising, Republican campaigns have typically been reluctant to spend early, preferring instead to show a high cash on hand number in preparation for expensive paid media blitzes.

The evidence is clear. Modern voter contact tactics like relational organizing, vote tripling, and deep canvassing outpace legacy tactics like phones and doors. With recent advancements in campaign technology, these strategies can be employed at scale – affordably – by campaigns and organizations of all sizes.

As paid media diminishes in both effectiveness and reach, campaigns, parties, and other organizations need to focus on technology-enabled, relationship-based outreach methods. Other tried and true campaign tactics are becoming more difficult with sophisticated consumer tools to block spam phone calls, marketing emails, and avoid answering the door.

As voters become more polarized, there are fewer and fewer competitive elections and fewer and fewer persuadable voters. This trend is at cross currents with the accelerating increase in political spending. In the most fiercely contested elections, oversaturation becomes a major challenge. Relationship-based voter contact is one of the few ways a campaign can cut through the overwhelming noise. With recent technology advancements, this can now be done with tools that reach more voters.

An electoral advantage will accrue to those campaigns and organizations that invest time and money early into recruiting meaningful volunteer support and tapping into their personal networks to persuade and mobilize voters.